Oleksandr (Alex) Yakovenko, the winner of this summer’s Ice Box Challenge Grand Prize, and his guest spent an October day in the Whistler area learning more about Passive House buildings. They joined Mattheo Durfield, of B.C. Passive House, for an excursion to the B.C. Passive House facility in Pemberton, and a drive-by tour of Rainbow House and other Passive House and Passive House–inspired residences in Whistler. At the end of the visit, Karel and Karen Jonkers gave them a royal tour of their magnificent Alta Lake Passive House. 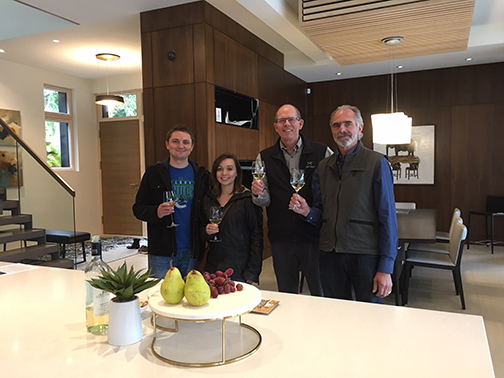 Alex’s guess of the final combined remaining weight of the ice from the two Ice Box Challenge boxes was within two kilograms of the correct combined weight. His entry was the closest estimate out of about 260 entries submitted for Ice Box Challenge.

The Grand Prize Package included a night for two at Whistler’s Summit Lodge Boutique Hotel and a gift certificate for a restaurant in the village, courtesy of the City of Vancouver, Vancity, Passive House Canada and other partners.

Second prize, won by Bernadette Zuniga of Vancouver, included a one-year membership to Science World and a tour of a Vancouver-area Passive House.

Passive House Canada thanks Mattheo, Karel and Karen for their gracious hospitality, as well as our sponsors the City of Vancouver and Vancity, and the many members of the B.C. design and construction industry who helped make the prizes happen and who helped Ice Box Challenge spread the word about the benefits of high-performance building.