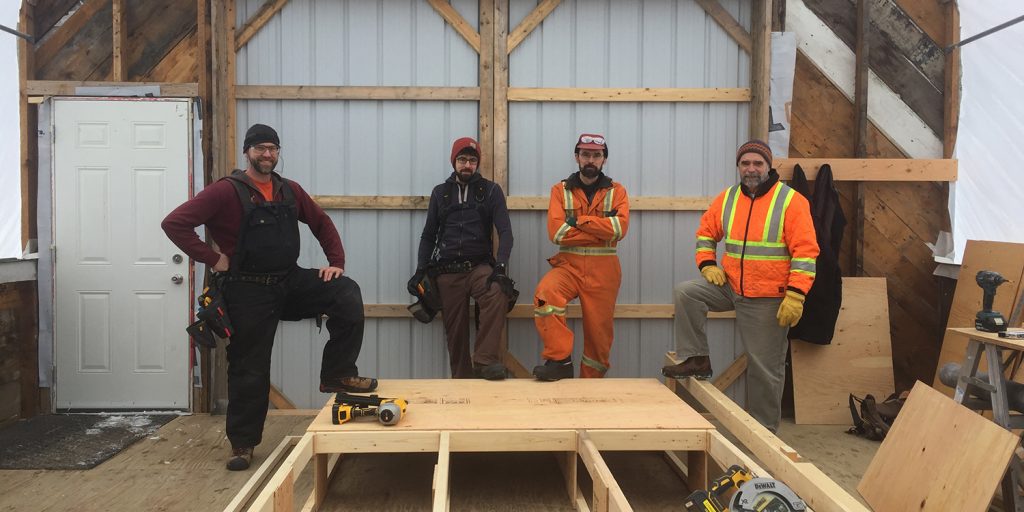 Q: How did you start building high-performance buildings?

A: I’m part of a family business. So right out of high school, I went to work for my uncle Randy. He was already thinking differently about everything around houses.

The first house that our family built, we decided to add extra insulation, face it south, and concentrate on air tightness. We kept on trying to improve the performance every time the family did a building.

A few years after that, we learned about R2000 and it was talking about higher insulation levels and air tightness We just thought that it was silly, being so cold here in Manitoba, to not try and make the houses warmer. So, we bought into that fairly early and so over the years, we just kept on refining what we’re doing. We had already started using a Larsen Truss and so, we combined it into one element and called it the modified Larsen Truss – 12 inch walls here in Manitoba was a big deal.

As soon as we learned about Passive House and saw the different methods to achieve the air tightness goal, we were like whoa, we can do that! And we do. That’s what we do now. We make buildings very airtight with plywood and tape and acoustical sealant free – very little plastic.

We attended the first Passive House training in Manitoba in 2013. So, I have been building high-performance buildings on and off for 30 years.

Q: Where did the passion to do something different come from?

A: In 1994, they were talking about climate change in University and my family has always been interested in social justice, the environment and ecology. When I started learning about climate change, I’m telling my whole family about it. We were all in agreement that with the passions we’ve chosen to pursue, construction, we can try and enact some change. 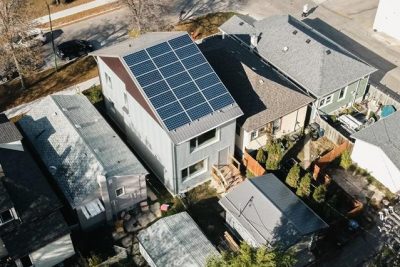 Q: Why did your family business become a co-op?

A: Prairie cooperatives and credit unions are quite common in rural Manitoba. So, myself and the founding co-op members all grew up being familiar with cooperative credit unions. The idea of incorporating that way was pretty immediate.

We had been operating under my uncle Randy’s small business, building houses, construction, cabinetry, renovations, and things like that. We wanted to concentrate on high-performance buildings after we learned about Passive House. It was inevitable because of our upbringing, the founding members were all family, and it just became something that was obvious about working together to achieve a common goal.

Q: What project are you most proud of?

A: If I had to pick one, it would say it would be an infill project for a small, very narrow, 25-foot lot here in Winnipeg. That building has five-kilowatt solar PV on it, very air tight. The challenge was the lot size, 25 feet and you had to subtract how thick the wall and the setbacks. So, we sat on the design for many years because it was a family lot and we wanted to make it a high-performance building. Once we had the design, the building authority was a bit of a challenge because we wanted to add solar panels. In Manitoba, you still have many hoops to jump through to put solar panels on the roof.

We prefabricated all the windows, but not the walls because we didn’t have a big enough shop then. They are 16-inch modified Larsen Truss – a 16-inch cellulose core, two-and-a-half-inch service cavity, exterior wood fiberboard, used as a cellulose retainer, ¾” inch rain strapping on the building – all metal cladding. It has a high performance Zehnder HRV and a subsoil heat exchanger that was self-built, not off the shelf. We use reclaimed hardwood floors throughout the whole building, which is pretty interesting; very labour intensive but they look fantastic.

Unfortunately, when we were installing the floor, my uncle Randy passed away from a heart attack. That was kind of his project, so we had to step in and finish it and then reluctantly, put the building up for sale.

A: Yes, Randy had made the street numbers out of the wall cladding and it’s in our neighborhood. We tour people in the building. We’re pretty proud of it. Randy and his partner were going to move in, so it was really heartbreaking. 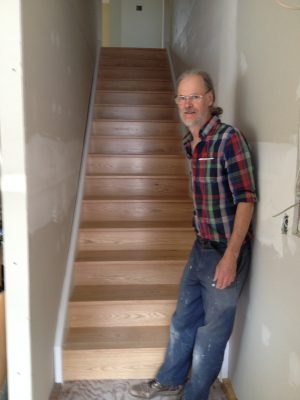 Donald’s Uncle posing in front of his set of oak stairs.

A: After my Uncle Randy passed away, my cousin (Randy’s son), myself and his partner decided since he was so passionate about Passive House here in Manitoba, we thought we should try and do something to help. So, we gathered some funds and talked to Passive House and it was mostly his partner Adina, the main driver behind it. Randy was always trying to get First Nations involved because we thought it was so crazy how desperate their housing needs were. I grew up beside a reserve, went to high school with folks from the reserve, and I’m Metis on my mom’s side. So, with the award, we tried to concentrate on Indigenous people taking Passive House training, but it hasn’t been used very much, so we are trying to figure out how to make it more accessible. 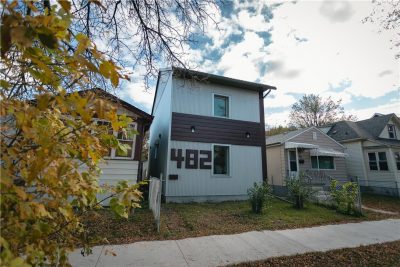 Q: What is the market like in Manitoba for high-performance buildings?

A: It’s small. It’s strange because some of the early work that was done that Passive House Institute used to come up with the standard came from the Prairies, the Conservation House. A lot of the people working on that worked in Manitoba in the 70s and 80s. But here hydro and natural gas is inexpensive compared to other places. In a market with only a single large city, the opportunities are fairly restricted. There are only three or four large developers and that market is pretty hard to break into. So, two things have to come together to improve the market: awareness and there is interest, and there is a lot of interest, but then there is the capital required. You need capital to do retrofits or high-performance new builds because it is more money for the insulation and better equipment, and better windows.

Knowing that the economics work, knowing that all of these benefits that accrue, knowing that it’s the only way that we’re going to have any effect on our construction industry as a whole and reducing carbon emission, it’s pretty frustrating when nobody is willing to enact any change. Our government is just not willing to move ahead.

Q: You have recently expanded into prefabricated buildings?

A: Yeah, we’ve seen the writing on the wall. There is lots of prefabrication happening in Europe. We’re pretty small, so we scrounged some resources to get a shop near Riding Mountain National Park where we have been producing walls. We’ve been building panelized walls, loading it onto the truck, hauling them to the site, bracing in a day and then construction as necessary. We haven’t done flooring or roofing yet, because the facility isn’t large enough.

Manitoba has a pretty severe climate, minus 33 Celcius design temperature so high insulation values are a must, the walls are thick, and you have to figure out the window, so all of that gets prefabricated as much as possible.