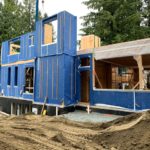 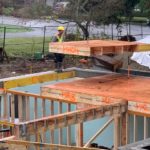 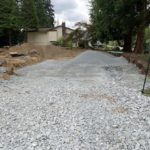 Karel Jonker is working on his third Passive House in British Columbia, and he’s set an extremely ambitious airtightness goal of 0.15 or even 0.1 ACH50. And he’s feeling confident for good reason. He recently partnered with his son on his family’s nearby Passive House—both homes are in Fort Langley—and working with the same panel manufacturer and builder, that house tested out at 0.17 ACH50. Jonker might have a small competitive streak—he was an Olympic rower—but that’s not why he’s set the new target lower. “We’ve made some improvements,” he says. Jonker dubbed his new net zero, all-electric house, which is being constructed for himself and his wife, QueenMary for its location.

The home was designed to be future proofed, making it not only resilient in the face of climate change but also attractive from a marketing perspective for decades to come. “It will still be salable 50 years from now,” says Jonker, in contrast to residences that depend on fossil-fueled appliances to function and also have high energy costs. His 7-kW rooftop PV system will charge his electric car as well as his house.

The three-story QueenMary features a low-slope hip roof and is oriented toward the south for optimal solar gain. The conditioned basement has two bedrooms, a bathroom, and a separate entrance so it can be used as a rental suite, an essential amenity in a market with high land costs. A great room occupies the ground floor, while the master and two guest bedrooms are on the third floor. An elevator whose shaft was built using crosslaminated timbers (CLTs) forms the core of the building. The shaft functions as the main structural support, allowing open-floor plans to flow without supportive beams interfering. A beautiful stairwell, also built using
CLTs, is a central design feature.

“It’s a dream Passive House project,” says Jeff Clarke-Janzen of Impact Engineering, who was responsible for the home’s PHPP energy modeling. The owner had a clear vision. Architrix, the architectural firm involved, had Passive House experience, and so did the builders. Indeed, Kingdom Builders, who had worked on Jonker’s son’s Passive House, simply moved the jobsite two blocks to start on QueenMary. Both houses were built using prefab panels manufactured in British Columbia. “There’s been no hiccups,” Clarke-Janzen adds. The flat roof assembly was constructed using 12-inch truss joists filled with cellulose and topped with a 40-mm wood fiber product. “We suggested this product because its embodied-carbon impact is so much lower than the foam alternatives, and it’s a nicer substance to work with,” explains Clarke-Janzen. “If you cut it, you can leave the fibers on-site, and they’ll degrade in a week.” Topping off the assembly is a standingseam metal roof on 4-inch-over-12 sloped trusses. The metal roof was chosen for its fire resistance and ease of cleaning—critical in the wildland-urban interface area where this house is located, because dry twigs and leaf litter are easy fuel for embers to ignite.

The foundation is a raft slab sitting in 14 inches of insulation. Eight-inch ICFs with a further 4 inches of EPS rigid foam form the basement walls; an interior 2 x 4 stud wall is filled with R-14 mineral wool batt insulation. Above grade, the 2 x 10 wall panels are insulated with cellulose and fitted out with a rain screen before leaving the factory. Interior to the panels is a 2 x 4 service cavity wall. The triplepane windows, which were installed on-site, were imported from Austria, delivering high performance at a price that rivals local double-pane windows, according to Jonker.

With extensive glazing on the south-facing façade, external shading was a necessity to prevent overheating in summer. Jonker waxes enthusiastic about the external venetian blinds on his first Passive House in Whistler: “They are fantastic! We use the blinds early in the morning when there’s low sunlight, and by noon we open them completely. They provide the added bonus of almost completely dark sleeping areas.” In the current home the external blinds will have automated controls. Even with this solar-control measure,
Clarke-Janzen doesn’t recommend building a home without cooling, as extra people visiting on hot days can push the house into overheating that can take several days to recover from, not to mention the warming climate. Each of the two upper floors has an air source heat pump for backup comfort control. A centralized HRV with in-line MERV 13 filters distributes fresh air to all floors—a great help year-round and especially when nearby forest fires increase the particulate count. Although there is no cooling in the basement, there is a radiant-floor heating system that is piggybacked off the CO2-based heat pump water heater. Kingdom Builders suggested this approach to warming the basement, which doesn’t benefit from solar gain in winter, after hearing about it from the Artisans Group in Olympia, Washington. PEX tubing snakes through the basement floor with a 12-inch spacing, allowing for just the right amount of heating to keep the floor at a constant 70°F.

Jonker anticipates that this small amount of hydronic heat, coupled with the solar gain upstairs and the overall airtightness of the house, will maintain a cozy 70°F interior temperature throughout the winter on all floors. This assumption is based on experience. When he first moved into his Whistler home, it was uncomfortably hot, even though it was October. The problem was traced to a faulty thermostat setting controlling a bathroom’s tile warmers. “That one small bathroom floor was overheating the whole house,” says Jonker.

Jonker is confident about this home’s airtightness, because to start with the panels are tested for airtightness before they leave the factory, are sealed to each other on-site, and then are wrapped in a vapor-open air barrier membrane. Proprietary tape is used to adhere this membrane to the basement walls. As one of the improvements made to this house, all plumbing and electrical penetrations go through the foundation, leaving the above-grade walls intact. Finally, all of the airtightness detailing is familiar to the crew from Kingdom Builders, making it a reasonable goal to attain a better number than they did at the last house.

Jonker has not yet calculated the cost premium for this house, but based on his experience, he expects the utility savings to immediately offset his mortgage increase. In any case, he can’t imagine building a house any other way. Five years ago, selling an electric car in Vancouver was challenging, and now Tesla is the top-selling car there, Jonker points out. He foresees a similar revolution in the housing market in the next five to ten years.