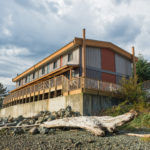 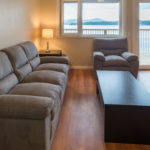 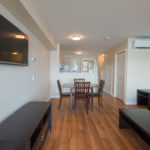 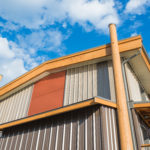 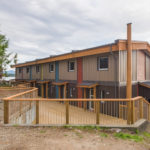 The Bella Bella Passive House is staff housing which consists of six, two-storey, attached townhomes. Each story of each townhome was a module, prefabricated and finished within Britco’s Agassiz factory. The modules were approximately thirty-two feet long and 14 feet wide and weighed approximately 32 tons each.

Constructing a project with such high standards, in such a remote location would normally prove to be a considerable challenge, at a considerable cost. The lack of skilled labour in the area, along with no experience in Passive House builds locally would likely have resulted in housing that would not meet the stringent certification. However, pre-fabricating the modules within a controlled factory environment enabled Britco to combine the required resources with the right materials, quality controlls and correct installation performed both by Britco and project consultants, resulting in a successful Passive House.

As part of the construction process, Britco built ‘mock-ups’ to demonstrate how such details as window framing would conform to the stringent requirements and overcome issues around thermal bridging and air-tightness prior to commencing the final build of the modules. Britco manufactured the twelve modules at its Agassiz plant in the Fraser Valley. The finished modules left the factory at the end of August and were barged out of Maple Ridge.

While the modules were being built in the construction facility, work had already started on the Bella Bella site. This parallel working practice is common with pre-fabrication and can result in a 30% shorter construction period. The modules were craned into place starting on August 30th, with the last modules being placed on September 10th. Substantial Completion was awarded on 30th September and residents started to move in the following day.