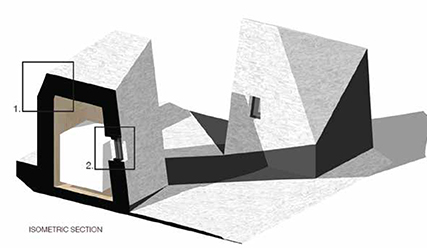 Stark Architecture and E3 Eco Group have won Passive House Canada’s design competition for the Ice Box Challenge, to be held in Vancouver this summer. We issued a call for designs in May.

Their design is informed by The Lions, or Ch’ich’iyúy Elxwíkn (Twin Sisters), unique North Shore mountain peaks that are covered by snow for much of the year and can be seen from many parts of the region. Stark Architecture’s Ice Boxes abstractly capture the landmark with faceted forms and white walls that deflect and reflect light.

The City of Vancouver invited Passive House Canada to coordinate Ice Box Challenge, a combined public demonstration and contest to create awareness and demonstrate the benefits of high-performance buildings. Inspired by similar events in Europe, the challenge requires the design and construction of two small structures. Passive House Canada members will build the two Ice Boxes designed by Stark Architecture and E3 Eco Group—one to the BC Building Code, the other to the Passive House high-performance building standard. The Ice Boxes will then be placed in a public space in Vancouver, each filled with equal amounts of ice, and left to sit outdoors under the hot, summer sun.

The public will be invited to submit their estimates of how much ice will remain at the end of the contest. Daily temperature readings and a camera feed will provide information about site conditions during the contest.

After 18 days, Passive House Canada will open and measure the amount of remaining ice.

With buildings contributing as much as 56 per cent of the City of Vancouver’s greenhouse gas emissions, the city’s Renewable City Strategy and Zero Emissions Building Plan depend on high-performance buildings becoming more widespread throughout the municipality in coming years.