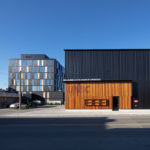 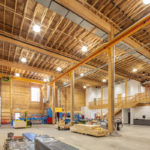 The Wood Innovation Research Lab (WIRL) is a research and teaching UNBC’s facility and was built and completed in April 2018. Owned and operated by UNBC, WIRL is a 10 meter tall single-storey, mixed-use building, with a large wood laboratory, classroom and office space. The superstructure is composed of mass timber glulam columns and beams and the external walls are framed with wood trusses.

UNBC uses WIRL to showcase mass timber as an alternative structural material to steel, which is typically used in industrial buildings. Mass timber was preferred because of its high strength-to-weight ratio and thermal performance. Additionally, mass timber prefabrication allowed the trades to do most of the work in a safe and controlled shop environment, particularly advantageous for cold climates like Prince George. Prefabrication also enabled greater precision and facilitated moisture control which reduced the risk of shrinkage or swelling of the wood components.

The foundation of the building is a 31 by 31 m concrete raft slab. The superstructure is composed of mass timber glulam columns and beams on a six-metre grid. The exterior envelope, including the roof, is framed using dimension lumber trusses with oriented strand board (OSB) sheathing. The second level floor is made of prefabricated wood I-joists and covered with plywood sheathing. All the interior walls are also covered with plywood sheathing. In the lab portion of the building, the OSB is left exposed for the interior finishing as an expression of the industrial use of the space.

The Wood Innovation Research Lab is one of the few facilities in B.C. and the first in Northern B.C. that allows complex research and testing of structural wood products, connections, and assemblies. The lab can be used to test different characteristics of wood products such as strength, stiffness, and failure modes. An overhead crane runs the length of one of the two bays, which allows for the safe maneuvering of large products and assemblies.

In one corner of the lab is a concrete strong wall and strong floor. The strong wall and floor are separate from the building structure and made of highly reinforced concrete with anchors on a 400 millimetre (mm) grid to anchor the materials. A hydraulic power unit (HPU) is used to imitate various types of gravity and lateral forces on the wood elements, connections and assemblies to study load bearing capacity and breakage point.

The building also has a universal testing machine (UTM) for tensile and compression tests, a Hundegger brand computer numerical cutting (CNC) machine, a programmable robot used for large three-dimensional fabrications, and a wood conditioning room. The conditioning room is equipped with humidifiers and ventilators to regulate temperature and humidity for normalizing moisture content of wood specimens — crucial for the consistency and reproducibility of the structural tests.

The building is equipped with fire suppression systems including a municipal-fed automatic sprinkler system throughout the interior space and fire extinguishers at the three entrances. The exterior walls that are close to adjacent buildings required fire rating for spatial separation. The south and east walls are covered with a 45 minute and the west with one hour fire-rated sheathing. Quick-response sprinklers were installed along the inside face of the south, west, and east exterior walls to create a water curtain. The north side, which faces a wide street did not require a fire resistance rating. The electrical transformer, located on the south-east corner, is enclosed within concrete walls.

Prince George has a cold and relatively dry climate, especially in winter, so moisture control was not a significant challenge. However, the structural members stored near the construction site before installation were protected from potential moisture and water damages. The glulam was covered with plastic wrap until enclosed within the envelope panels and roof. The trusses were already sealed on the interior side with OSB panels when brought on site. Prior to the installation and enclosure, the envelope panels were covered with tarp and snow was easily brushed off. The exposed western red cedar wood cladding on the north east and south east are protected by a water resistant coating, which reduces moisture damage while providing a natural finish.

The exterior wall is designed to eliminate the condensation risk that can occur if there are humidity and temperature differences between the interior and exterior environments. The wall assembly includes an innovative airtight membrane on the inside which responds to temperature. It seals to prevent vapor diffusion from inside in the cold months, when the outside temperature and moisture content are low. Through chemical reactions during the warm months, the membrane opens to allow the wall to dry out as vapor travels from outside. Since this is the first application of the product in this environment, the manufacturer conducted tests to ensure compatibility with the other assembly products, such as the taping adhesive that was used to lap the membrane joints.

The interior walls that separate the office and classroom spaces from the lab are filled with sound absorbent insulation. Additionally, a metal resilient channel was used to connect the drywall to the studs and create an air space to reduce noise transmission. The exterior wall assembly, which includes a thick layer of mineral wool insulation, provides enough acoustic barrier to prevent noise from being transferred outside of the building.

The main acoustic concern for the building was the reverberation time — the time it takes for the sound to be absorbed by the surfaces of surrounding objects in the lab space. Specifically, the high-frequency, high-volume noises from lab equipment reverberating against the hard and reflective surfaces of the concrete strong floor and walls, gypsum board walls, and OSB wall finishes. If not mitigated, the reverberation time could, according to a preliminary student analysis, be over five seconds and become an issue for the lab, classroom, and office spaces.

As part of course projects, UNBC students refined the original interior design of the lab by adding sound reflective surfaces (plywood panels) on the OSB wall surfaces and sound absorbent baffles on the ceiling. The plywood panels in the lower section of the room divert sound waves towards the ceiling without absorbing or collecting saw dust. The solution is calculated to cut the reverberation time down to approximately two seconds, which exceeds the standard work-space requirements.

WIRL was the first building in North America to seek Passive House certification in an extremely cold climate. In Prince George, the average summer temperature is 16˚C and the average winter temperature is -6 °C, resulting in 234 days per year that require mechanical heating or cooling. The severe climate condition was one of the main challenges for achieving Passive House certification. UNBC conducted an early feasibility analysis and specified certification as a requirement in the bidding process to ensure that the project team was committed to designing and building the project to Passive House standards.

The Passive House certifier awarded the certification based on the review and approval of the building’s overall design and performance. This was demonstrated through the Passive House Planning Package (PHPP) energy model, a blower door test, the commissioning of mechanical system and construction documentation. As a research and education opportunity, UNBC will continue to monitor the performance of the building captured through temperature and moisture sensors and electricity meters.