“The approach has been widely discredited as a means of obtaining a reliable estimate of actual building performance; it is known as a code compliance tool, not a predictor of actual performance.”

The approach has been widely discredited as a means of obtaining a reliable estimate of actual building performance; it is known as a code compliance tool, not a predictor of actual performance. Its widespread use is one of the largest contributors to the endemic “building performance gap”, the difference between anticipated and actual performance of a building. This topic has been the subject of many studies, including one by the International Partnership for Energy Efficiency Cooperation (the OECD building energy efficiency program), and report commissioned by Sidewalk Labs on multi-unit residential buildings in Toronto. For decades regulators and owners have been frustrated by buildings being presented as ‘green’ or ‘efficient’ during design, but which consume far more energy than anticipated in operation. Establishing absolute, rather than relative, performance metrics in an outcomes based code has emerged as the recommended regulatory mechanism to minimize the performance gap.

Despite the original intention of the BC Energy Step Code to be an outcome based code and the widely known limitations of the reference building approach, both the BC Energy Step Code Council and the federal Standing Committee on Energy Efficiency have elected to permit its use as an alternative compliance path for Part 9 buildings (houses and other small buildings), and the possibility of permitting it for Part 3 (large) buildings has been raised.

As the compliance path only applies to Part 9 buildings for now, let’s take a look at how the reference building approach works in the context of houses. 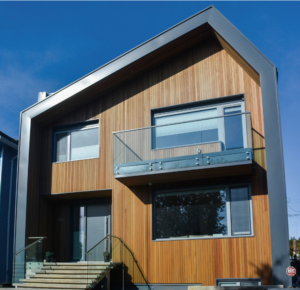 Perhaps the most important factor is the impact of form factor; something any Passive House designer is familiar with. Figure 1 below contains plan views of 4 house designs, all having the same floor area. Building physics dictates that the most energy efficient of those buildings is the cube because it minimizes the envelope area relative to the enclosed space. In the language of an energy modeller, it has the most favourable “form factor” because it has the least envelope area radiating heat in the winter, the primary concern in Canada’s climate. Most Passive House projects are similar to the cube or the “20% more” design simply because the more complex floor plans in Figure 1 are not able to meet the stringent Passive House performance targets at an affordable price. It is important to note, a complex envelop having 150% of the envelope area of a cube is common in cheaply built track and spec houses. Custom homes have an even greater envelope area, often in the range of 250% – 350% the envelope area of a cube for a given floor area. The jigs and jags in the exterior walls in Figure 1 are exaggerated for illustration purposes, but the relative area to volume ratios are not exaggerated from what is the norm in the Canadian market because the vertical dimension offers additional opportunities for inefficient design with complex roofs, foundations, garages, offset floor plans and other features.

An efficient, compact building form is one of the reasons Passive House single family residences are being delivered in Canada at costs indistinguishable from comparable homes built without regard to energy efficiency. The reduction in envelope area offsets other costs such as more thoughtful design, excellent windows, insulation, air sealing and a silent, high efficiency ventilation system. Those who claim energy efficiency substantially increases costs are typically evaluating the cost of trying to make an inherently inefficient design operate efficiently, which is inevitably an expensive endeavour. If the comparison is between a home designed without regard to efficiency and a home designed to achieve Passive House outcomes, the Passive House is often cheaper. Our ancestors’ recognition of the advantages of a compact form is evident in most vernacular architecture – notice the favourable area to volume ratio of many old, beautiful buildings. Some Victorian buildings are complex in form, but generally it is only in recent, more affluent, times that designers have fallen into the habit of relying upon jigs and jags in the envelope to create architectural interest.

Figure 2 below illustrates how the reference building approach increases the permitted energy use of a home as the form factor becomes less efficient. The thermal energy demand intensity (or TEDI) is the amount of heating energy demand per square metre. Figure 2 graphs the heating energy permitted by Step 5 of the BC Energy Step Code for different house designs, as modelled according to the Step Code requirements using HOT 2000. The BC Energy Step Code methodology is used as it is more fully developed but the proposed national code is expected to be substantially similar. 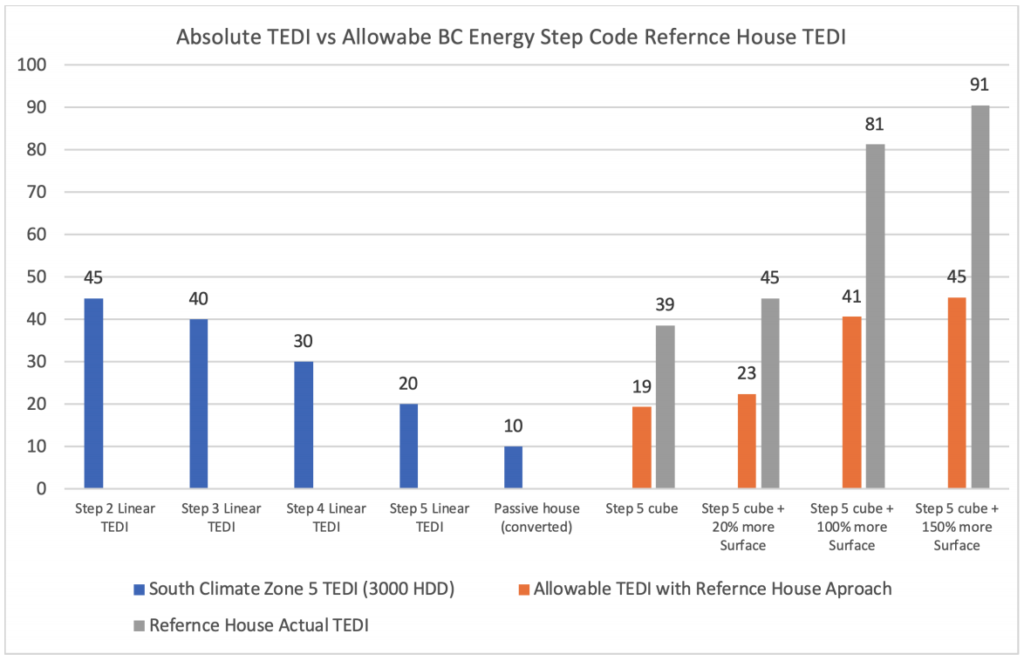 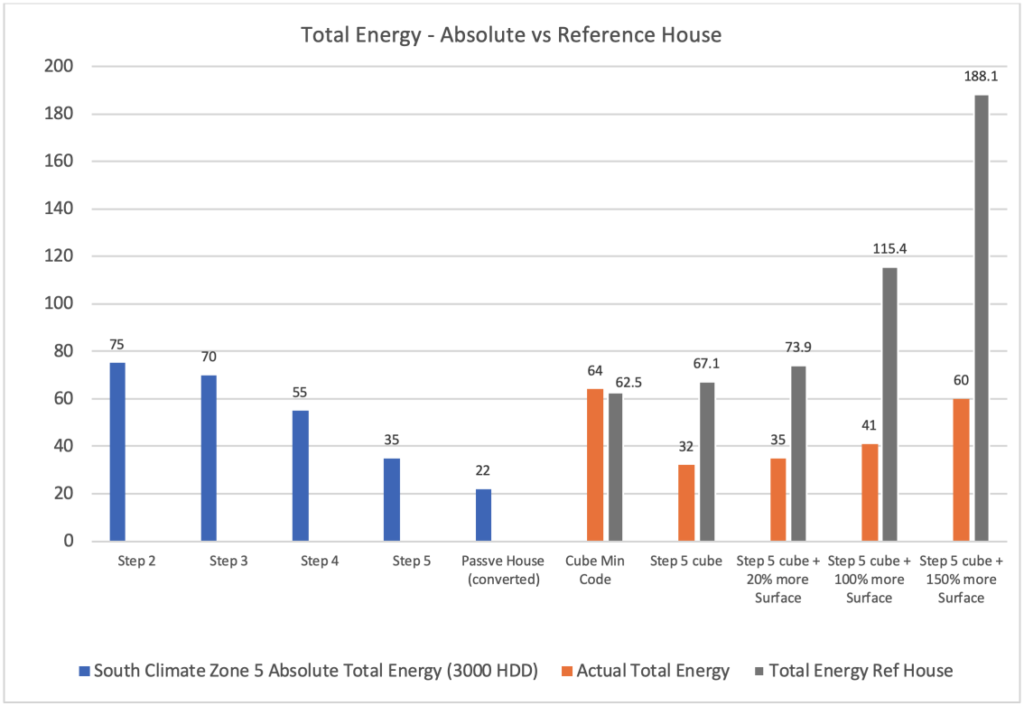 FIGURE 3 – Mechanical Energy Use Intensity Step 5 BC Energy Step Code The blue columns represents the target MEUI for different steps of the Step Code, plus Passive House, adjusted for measurement differences as in Figure 2. The pair of columns labelled “Cube Min Code” represents the modeled MEUI of a cube built to minimum code, with the proposed modelled MEUI being the orange column and the grey column being the modeled MEUI using the reference building approach. As expected, the cube and the reference building perform almost identically. The “Step 5 cube” columns represent the modeled MEUI for a Step 5 cube shaped house. Notice the actual modelled MEUI is about half of what it is for the minimum code version of that house, as expected. The reference building for the cube remains the same minimum code cube, so the grey column is approximately the same as for the minimum code cube. Each subsequent pair of columns represents the modelled actual MEUI and reference building MEUI for less efficient form factors. All of the buildings meet Step 5, but the home with 150% of the envelope area could consume over 3 times the energy (60 or 70% of 188.1) and still meet Step 5. As the relationship is logarithmic, the distortions increase as the form factor increases.

The inequity of these results is striking – those with a limited budget are required to build to a higher level of efficiency. In fact, those designing a compact form are unable to meet the reference building thresholds because their designs are inherently efficient. Even a typical compact Passive House would not meet the reference building criteria for Step 5, although it easily exceeds the absolute target for Step 5 can use that absolute metric to comply. 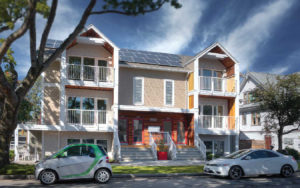 The actual results of homes modelled using HOT 2000 and the reference building approach can be even worse than illustrated in Figures 2 & 3. These calculations are done without utilizing any of the well-known ‘cheats’ available within HOT 2000 & the EnerGuide system. For example, having a crawl space 4’1” in height, rather than 4’, can double the heating energy and permitted air leakage of a single storey home because a space over 4’ in height is considered heated space, a design choice known as the ‘crawl space cheat’. HOT 2000 has other quirks as well. For example, it cannot reflect the impact of exterior shading (other than overhangs) or thermal bridges. The EnerGuide reference house also changes the window placement on the reference house to consolidate many small windows on the actual house into one large one (and, depending on window area, it may also change the size), with no shading, on each elevation of the building, regardless of the design of the actual house. Each of these factors can have a substantial impact which, when combined with the distortions inherent in the reference building approach, lead to an almost meaningless comparison of the actual performance of an efficient home.

Figures 2 & 3 above also illustrates how far the current Step Code and the proposed national model code are from delivering the efficiency required for Canada to achieve its goals and meet international norms. The distortions within the reference building approach are so severe that it is possible, utilizing common designs, to have a Step 5 house not even meet the prescriptive requirements of today’s minimum code. The real difference is that the home can now be marketed as a Step 5 house, backed by a government marketing & communications program giving credence to that label. As easily as that, the BC Energy Step Code has been transformed from a performance based code to an almost meaningless marketing program, with the same shortcomings as the numerous other green building marketing labels that fail to deliver results. The proposed model national code is headed in the same direction.

“The distortions within the reference building approach are so severe that it is possible, utilizing common designs, to have a Step 5 house not even meet the prescriptive requirements of today’s minimum code.”

There are other issues with the Canadian code development process the space in this short article does not permit an exploration of. Fundamentally, such issues arise on a recurring basis for the reasons identified in the previous policy article in this series titled ‘Regulating Excellence’, which broadly aligns with the findings in a report published by Efficiency Canada. Such issues are well known within industry, and builders are being trained how to build to the BC Step Code without having to build significantly better homes, defeating the purpose of that policy launched with such promise. All indications are the model national building code is on the same path.

Passive House Canada and its members are working to support government and industry in delivering buildings that will enable Canada to meet its international commitments, achieve its domestic goals and offer Canadians the healthy, comfortable, resilient and affordable new and retrofitted buildings they need. We continue to work with regulators to broaden the understanding of the fundamental principles that enable such buildings.