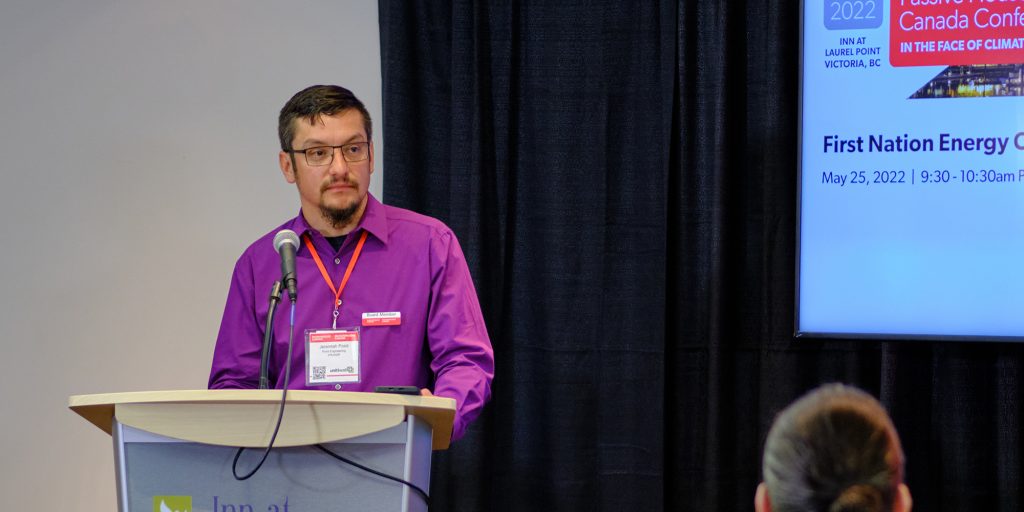 Jeremiah Point P.Eng., LEED AP, is the owner of Point Engineering, a company based in the Territory of Akwesasne. As a proud Akwesasro:non, Point incorporates new technology with traditional values. A Passive House certified designer and Director on the Passive House Board since 2020, he is committed to promoting the Passive House Standard to all his clients.

I went to the BuildEX in Toronto in 2017 with a company called Legalett Canada and our booth was in the Passive House Pavilion. Passive House Canada was doing a few different talks right next to our booth. I didn’t really pay much attention to it at the time, but afterward, I looked into it a little more. That’s what got me started. I knew it was the future. I became a certified designer in 2019. I immediately submitted my name for the board position later that year.

The evolution of buildings is going to get us to the Passivhaus-level eventually. It’s just a matter of time. I saw Passivhaus as the natural progression of buildings, and I needed to be informed and involved and educated on what’s to come next – it’s ‘future-proofing’ my career.

How successful have you been at convincing people that Passive House is the future of building?

It’s been almost four years now that I’ve been pushing Passive House in my community and to everyone I meet in the building industry. Any project that I’m on, I’m talking to the general contractors, the architects, the builders and I keep pushing them.

A few weeks ago, I did a presentation to the Ontario Architects Association (OAA). One of the discussions was about energy modelling, which has always been a question for the mechanical engineers after the building was designed. One of the questions that I had in the presentation was, how do we shift that back to architects? Because it really needs to start from ‘day one.’

How do we arrive at that renegotiation between the mechanical engineering of the building at the inception of the building’s design? That, to me, would be the transition period. Integrated projects delivery – get everybody together to collaborate and design the building.

We also need to stop using the excuse of a few percent points on the capital budget costs to spend the other 90 per cent on operating and heating and cooling costs. When you look at the total cost of the building over time, Passive House is going to be cheaper every single time.

There’s a shift that’s happening, and we’re in this transition period. Buildings have been evolving. Today we look at buildings from only 50 years ago and we’re like, that was insane. What were we thinking?

One or two generations from now, when we look at the buildings today that meet building code, they are going to be saying the same thing – that we were insane. And we already know it’s insanity. I don’t want to be a person who builds a building and 25 years from now, someone looks at it and says, ‘that’s garbage.’ I don’t want to be associated with that.

It’s the people who aren’t convinced who need to be reached. We have a whole Passive House community that’s growing exponentially, especially in Ontario. They’re already convinced. We need to be preaching more to building code officials, to people who are establishing the budgets, especially municipalities where they’re looking at operating budgets.

I was connected with the Housing Department here in Cornwall for low-income rental housing. When I introduced them to Passive House, I told them if you build it Passivhaus, you could make it profitable. The first one [they build] will not be Passive, but the next one, they want it to be Passive. Every municipality is going through that same awakening. And if we can’t get the provincial building code to do it, then we need to just get people to exceed the building codes.

You are a Director on the Passive House Canada Board – what has that experience been like?

I joined the Board in 2020. There’s been a real shift on the Board around First Nations. I presented the issues and information to them after living through the issues experienced by First Nations myself. The Board responded in a way to make Indigenous Peoples a priority. Now, they’re offering free classes to First Nations, Inuit and Métis.

When we did the Strategy Workshop [for Passive House Canada] after the Annual Conference, where we worked on what Passive House Canada is going to look like for the next three- to-five years, I wasn’t the one who was constantly saying, “We need to address First Nations housing.” It was the other Board members. There were more ideas to address First Nations housing coming from the other Board members than me. I was just blown away by that.

What are some of the barriers experienced by Indigenous Peoples in receiving Passive House training and/or certification?

The online component is great – as long as First Nations communities have high-speed internet access to attend the online portion. And a lot of them don’t. Only in the last several months have I been able to get internet speeds fast enough to do video conferencing in my community. I always had to turn off my camera so that the sound and audio doesn’t break up. It’s just that recent – a few months.

When we talked about going back to in person training after COVID, I said, you know, we always do it in cities like downtown Toronto, Vancouver. It’s a financial barrier for First Nations people to attend.

For every major city there’s a First Nation’s reserve nearby on the outskirts, within an hour’s drive. Instead of trying to hold those classes downtown where it’s costly, why don’t we rent the recreation facility in that First Nations reserve nearby the big city and hold the classes there?

Then, First Nation’s individuals who really, desperately need the classes can attend for free, and within their own communities. The classes become geographically accessible as well as presenting fewer financial barriers. The people downtown will spend money in those economically depressed areas. All we have to do, as a Board, is look up where First Nations reserve areas are and find a better place to hold the in-person sessions.

How can the Board help with some of the bigger challenges faced by First Nations – such as the housing crisis?

For me, it’s about delivering knowledge. Since the housing crisis on the reserve started – which has always been there – Canada has been doing the same thing for decades, and nothing changes. At the Annual Conference there was mention of this big recent announcement by the Canadian government that there was $450 million going towards addressing the First Nations housing crisis on reserves…. Just like announcements in the past…And it doesn’t change anything.

The houses that are built are barely suitable to meet southern Ontario conditions, let alone places like Attawapiskat a thousand kilometres north. When I gave my presentation, I pulled out a map. I said, here’s the facility where these houses are being built, it’s being built to the Ontario Building Code.

But, because it was built before SP12, and because Reserves fall under the federal building code, not the provincial building code, the modular homes being built were 2 x 6 framed construction with fibreglass insulation, and there wasn’t even a continuous R5 barrier on the outside yet — because SP12 came in after the contract was awarded. Double-pane windows, contractor-grade – just the bare minimum. We know they’re not even suitable for Southern Ontario climate, let alone that far north.

In northern Ontario, double-paned windows are just going to cause mould and mildew regardless of how many people live in it. It’s physics and thermodynamics, laws of nature. You’re losing before you even start. It’s set up to fail.

Any time there’s an announcement, or even when a First Nation applies for the funding to obtain the funds to build houses, it’s never energy efficiency that’s part of the equation. The conversation is always about how many houses you’re going to get, how much money it’s going to cost, how many people it’s going to benefit. It’s never a question of whether they’re going to be good houses or proper housing for their climate.

What would be important to see on the federal level – building codes need to be Passivhaus across the board – not just federally but provincially, without delay. And they need to build to the local climates.

At the same time, you can’t swoop in and give the First Nations a solution. That’s what Canada has been doing time and again, and it doesn’t work. That’s why the focus needs to be on delivering the education, so [Indigenous People] know what’s possible. A lot of them have never experienced living off the Reserve. They have only ever experienced poor housing. They have no idea that there are Passive Houses that don’t require furnaces and heating.

A person shouldn’t have to be a building engineer to tell the builder they want Passive House. They should be educated to the point where they know enough to demand a Passive building from their designers and architects and engineers. And it should be automatic and default that the architects deliver that.

In the past, you have made statements comparing traditional Indigenous dwellings and Passive House. Can you elaborate on that?

Every Indigenous Peoples around the world found a way to live in their climates without the need for energy. They all found a way, and that’s why their housing styles are so different.

That’s what resonated with me when I took the Passive House training. I was shown a picture of a high-rise multi-unit dwelling, I thought: It’s a vertical longhouse. My ancestors lived in longhouses with 200-300 people under one bark structure and they were warm all winter long, just from the body heat. It works, and it worked for thousands of years. Now we just need to recreate that.

Every part of the building sector needs to be bombarded with this knowledge. We already see it on the west coast, in Vancouver and Victoria where the market is saturated. And now it’s shifting to Ontario, where they are going through the same growing pains that BC did.

We needed to do it 30 years ago. Passive House should have happened a long time ago. They say the best time to plant a tree is 20 years ago. Well, the second-best time is today.